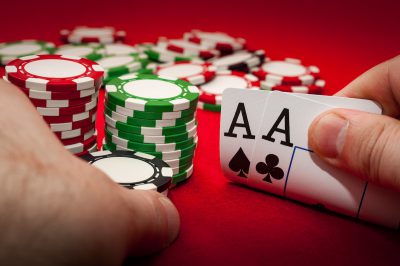 I have updated my reference application with code that evaluates Texas Hold ‘Em poker hands.

I had written the poker logic a few months ago. Recently, I moved it into a class library and service in order to validate my ASP.NET Core MVC + SOA Architecture. This project is a long way from a functioning poker application that enables users to play Texas Hold ‘Em against artificial intelligence “bots”- my ultimate goal. But it’s a fun start. Evaluating poker hands certainly is more entertaining than confirming a “Hello World” message sent through an SOA stack appears at the other end of the pipe- on a web page in the user’s browser.

The MVC page located at /poker/holdem/cash/dealtoriver/10 (not publicly accessible) displays the results of dealing a full table of 10 players:

The MVC page located at /poker/holdem/cash/dealtowinninghand/10?handname=straightflush (not publicly accessible) displays the results of dealing a full table of 10 players until a specific winning hand appears:

StraightFlush encountered on the 2,972nd deal.

The card shuffling and poker hand evaluation code is sufficiently fast. I know I can make it faster using bitwise tricks I’ve picked up over the years (there’s 64 bits in a ulong, only 52 cards in a full deck), but I’ll leave that as a future optimization after I write robust unit tests.

The code performs these tasks…

… in five milliseconds. Not bad for code executing across two processes (website and service).

The code runs in five milliseconds. Not bad for code executing across two processes.

Speaking of unit tests, I have written a few. One of the most important is a test that validates the deck shuffling method produces an even distribution of cards. Meaning, over the course of many deals, each card has an equal chance of appearing in each of the 52 positions in a deck. When writing the Deck class, I referenced Microsoft’s RNGCryptoServiceProvider, then wrote the following code which implements the Fischer-Yates algorithm to randomly shuffle cards. Actually, I wrote the Shuffle method with generics so I may use it in other projects (not only for the Deck class).

I wrote the following code to validate Deck.Shuffle() is evenly distributed.

In addition, I worked on data tier architecture. I wrote a class library with code that…

Next steps are to move the web service call from the website controller to AngularJS code running in the user’s web browser. Then perhaps write more poker logic. The code I’m most concerned about (other than artificial intelligence bot code) is how to correctly separate bets into multiple pots when players call all-in bets with short stacks. An entire table of players calling all-in with various stack sizes is a nightmare scenario. What is the correct algorithm and how do I write unit tests that exercise all the edge cases?